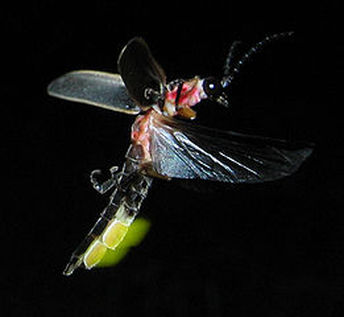 Photinus pyrlais has a hard exoskeleton, six jointed legs, two antennae, compound eyes, and a body divided into three parts head, thorax, and abdomen.  Its head has a rounded cover outlined in yellow and accented with two orange spots. Photinus pyralis has two pairs of wings.  The elytra, are dark brown with narrow yellow markings on the sides and cover and protect the second pair.

Dimorphism
Male and Female Photinus are shaped differently and only males use the second pair of wings for flying; females have short wings, and do not fly. 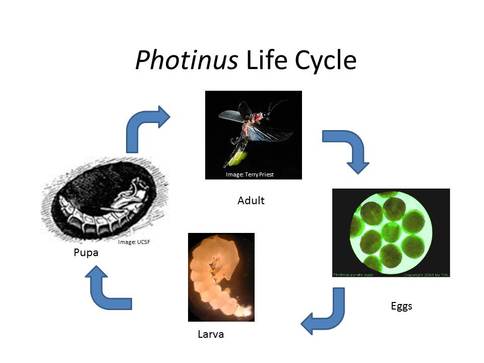 Life cycle
The life cycle of Photinus can last up to two years. Their life cycle is homotblous or complete. Eggs are laid on moist soil. Larvae take two summers to complete growth, overwintering twice. The adult stage lasts for 5 to 30 days.

Light Patterns
The male Photinus pyralis flies in a J pattern emitting a yellow-green light that repeats every 6 seconds. The female later responds to from the ground about two seconds after the male.

Mating
Although female Photinus are attracted to a mate based on his flash, there is more to her choice. The more important factor is the size of the nuptial gift.  The female Photinus typically lays about 500 eggs.

Cannibalism
“Female fireflies of the genus Photuris, the so-called firefly ‘‘femmes fatales,’’ prey on male fireflies of the genus Photinus . The females are able to entrap the males by faking the flash signal characteristics of the Photinus female. We found that by feeding on Photinus males, Photuris females gain more than nutrients. They also acquire defensive steroidal pyrones called lucibufagins, which are contained in Photinus But which Photuris fireflies are unable to produce on their own. Photuris females that eat Photinus males or lucibufagin are rejected by Phidippus jumping spiders. Lucibufagin itself proved to be a deterrent to such spiders. Field-collected Photuris Females contain lucibufagin in varying amounts. The more lucibufagin they contain the more unacceptable they are to Phidippus.” (Eisner et. al.)